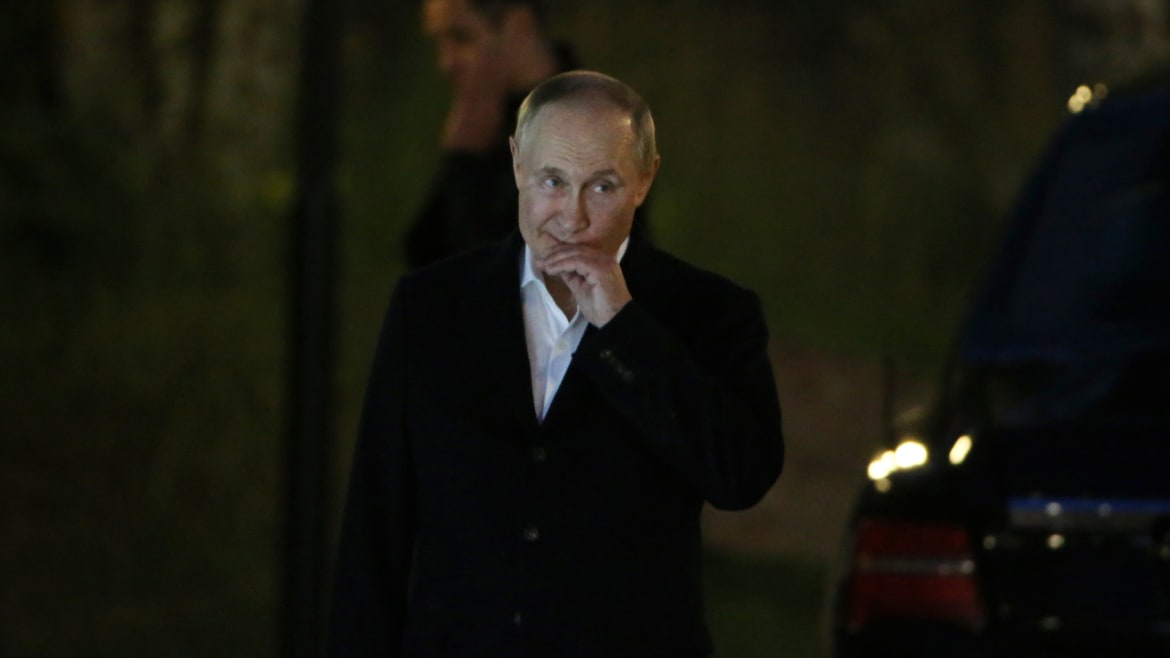 As Ukrainian forces gain momentum and push Russia’s military to retreat from territory stolen during the war in Ukraine this year, Moscow is working to signal that some territory it took from Ukraine is off limits.

Russia’s Governor for Crimea, Sergei Aksyonov, said Friday that Russia is working to fortify its defenses in Crimea, the peninsula Russia illegally annexed from Ukraine in 2014, as fears mount that Ukrainian authorities may have their sights set on seizing it back.

“The security of the Republic of Crimea and its inhabitants is ensured through measures taken on behalf of our President,” Aksyonov said. “The joint work of the authorities, the Ministry of Defense of the Russian Federation and law enforcement agencies is aimed at ensuring that the Crimeans can feel calm.”

Despite Aksyonov’s insistence calm will reign in Crimea, civilians in Crimea have reportedly begun reading between the lines and fleeing as fears mount that Ukraine might be serious about taking Crimea back, according to Emil Ibragimov, the head of the educational platform Q-Hub. Ibragimov told Radio NV that people are fleeing to the Russian region of Krasnodar to avoid any fallout, according to Newsweek.

“That is, we see this trend and can conclude that this is, of course, panic and fear that the [Ukraine] Armed Forces will be able to liberate Crimea in the near future,” Ibragimov said.

Aksyonov’s attempt to craft the narrative that Crimea will hold comes as at a time when Russia’s plan to take over Ukraine seems shakier than ever before. Increasingly, Russian officials are questioning Russian President Vladimir Putin’s judgment and war plans. Ukrainian forces’ counteroffensives throughout Ukraine have forced Russia to retreat from multiple pockets it had seized during the conflict this year. Just earlier this month, Ukrainian forces pushed Russian troops from Kherson—a key city which was Russia’s last stronghold west of the Dnieper River—which Ukrainian officials view as a precursor to taking Crimea back.

Kherson lies just north of Crimea, and the defeat there represents a major loss for Putin’s dream to create a land bridge from Russia to Crimea, as well as supply further incursions into Ukrainian territory.

The Secret Mission to Snatch Crimea Back From Putin’s Clutches

The loss of Kherson also signals to Ukrainian President Volodymyr Zelensky’s administration that it may be go-time to go after Crimea and kick Russia out, The Daily Beast has learned. The official in charge of taking Crimea back from Russia in Zelensky’s administration, Tamila Tasheva, told The Daily Beast in an exclusive interview early this month that seizing back Kherson is a precursor to taking back Crimea, and that the Zelensky administration is increasingly eyeing the military component of kicking Russia out.

“We understand it’s really connected—deoccupation of Crimea—connected to the situation in the battlefield, in the southern part of Ukraine, especially deoccupation of Kherson,” Tasheva told The Daily Beast.

And while diplomacy is key to taking back Crimea, “we also [talk] about another mechanism of deoccupation including, of course, military components of deoccupation,” Tasheva added.

Zelensky said in an interview Thursday with Bloomberg that there will be no peace until Ukraine has taken back Crimea. “A simple ceasefire won’t do the trick,” he said.

Russia has, indeed, been focusing attention on Crimea in recent days, according to a British intelligence analysis shared Friday.

“Following the withdrawal of its forces from west of the Dnipro River, Russian forces continue to prioritize refitting, reorganization and the preparation of defenses across most sectors in Ukraine,” the intelligence analysis said. “ Units have constructed new trench systems near the border of Crimea, as well as near the Siversky-Donets River between Donetsk and Luhansk Oblasts.”

The particularly limited number of stable roads and railways in this area could make it vulnerable to Ukrainian targeting, according to the Institute for the Study of War. Ukrainian forces are reportedly not yet working on the east bank of the river, though.

The renewed attention on Crimea comes as Ukrainian forces are gaining ground across Ukraine and as Russian leadership increasingly realizes how poorly prepared the military is to match Ukraine and its continued military assistance from the west, given Russia’s poor logistics and execution of battle plans since the early days of the war. The response from Russia has been a frenzied attack on Ukrainian energy infrastructure, in an apparent attempt to use what little strength it has left to deprive Ukraine of energy resources during the winter, analysts say.

Russia initiated attacks against Ukrainian infrastructure following several attacks against Crimean military entities in October. While Russian forces continue their offensives in Bakhmut, Avdiivka, and southwest of Donetsk City, in just the last 24 hours Russia has been shelling the regions of Kherson, Zaporizhzhia, Dnipropetrovsk, Sumy, Donetsk, Mykolaiv, Chernihiv, Kharkiv, and Luhansk, according to the regional military administrations. Early this week Russia unleashed nearly 100 missiles in Ukraine in what is believed to be one of its largest attacks yet this year.

The Rupture That Could Trigger Putin’s Deadliest Rampage Yet

Recent Russian strikes on Ukrainian infrastructure have left approximately 50 percent of the Ukrainian energy system out of order, Denys Shmyhal, the Prime Minister of Ukraine, said. Emergency shutdowns are predicted in the coming hours and through the weekend, state energy company Ukrenergo said in a statement Friday.

The dire situation coincides with the first snow in Ukraine, in a signal that tougher winter days lie ahead. Ukrainian officials have begun to fear that they may not be able to repair from some attacks on energy infrastructure in the near future, according to Politics.

Poland is preparing for an influx of Ukrainian refugees as the winter months settle in and Ukraine may become increasingly unlivable, according to local reports.

Ukrainians will need to be resilient in the coming days if Russia continues its campaign, Ukrenergo warned Friday.

“Limitation of consumption is the consequence of rocket attacks by Russians on the energy system of Ukraine,” Ukrenergo said Friday. “This winter, we must show endurance and courage to confront the enemy on the energy front.”

Shmyhal added Friday that Ukraine has imported nearly 9,000 generator sets to try to help ease the difficulties with energy supplies, according to customs data as of this week.

Read more at The Daily Beast.

Get the Daily Beast’s biggest scoops and scandals delivered right to your inbox. Sign up now.