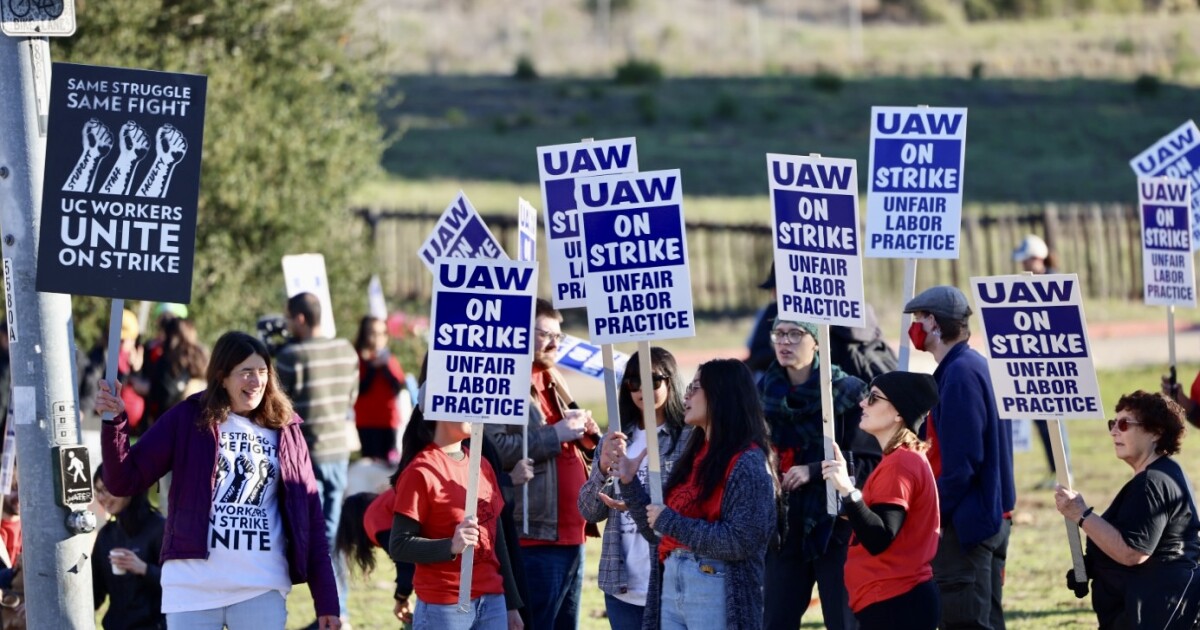 Have something to say? Lookout welcomes letters to the editor, within our policies, from readers. Guidelines here.

As a systemwide strike of University of California academic workers rolls into its fourth day, there appears to be little movement on deals between the UC Office of the President (UCOP) and the 48,000 teaching assistants, readers, tutors, researchers, graduate students and postdoctoral students on strike for increased wages and other benefits across the university system’s 10 campuses.

A steady group of about 80 picketers remained at the base of the UC Santa Cruz campus and its western entrance throughout much of Wednesday, slowing vehicle traffic. Rebecca Gross, a literature Ph.D. candidate at UCSC and head steward of United Auto Workers (UAW) 2865 — which represents 19,000 academic student employees throughout the university system — said that with little movement on the bargaining front, demonstrations will likely continue through week’s end. About 2,000 academic workers are on strike at UCSC.

“If it’s a question of stamina, I think we’ll have UCOP beat,” Gross said.

Since the labor action began Monday, many in-person classes at UCSC have been canceled or moved online. UCSC spokesperson Scott Hernandez-Jason said in an emailed statement that the university’s focus remains on maintaining continuity of learning for students. He said the university is providing resources to department chairs and instructors to ensure that gaps caused by strike activities are filled by replacement instructors or assignments — though he did not respond to questions about what sorts of workers are being used as replacement instructors, or what this would look like in practice.

“Department chairs and faculty will work together to ensure the least amount of disruption to the delivery of instruction and grading, as well as research,” Hernandez-Jason wrote.

UAW unit chair Jack Davies said that although there has been some negotiating movement for Student Researchers United (SRU) — a new bargaining unit for the UC’s 17,000 student researchers — as a whole, little dialogue has taken place between the two sides since negotiations deadlocked last weekend. No negotiating sessions were on the books for this week as of Wednesday.

“It’s mostly a matter of waiting around now,” Davies said. “There doesn’t seem to be a terrible amount of urgency among UCOP to meet at the negotiating table right now.”

UCOP spokesperson Ryan King said in an email Wednesday that the UC believes that the “best path to an agreement is with the aid of a third-party mediator,” citing the more than 50 negotiating sessions that have taken place between UCOP and the four UAW bargaining units since discussions began in April.

“[We] have proposed to the United Auto Workers enlisting the assistance of a neutral private mediator so that we can achieve a compromise,” King wrote. “We continue to encourage the union’s partnership in pursuing mediation.”