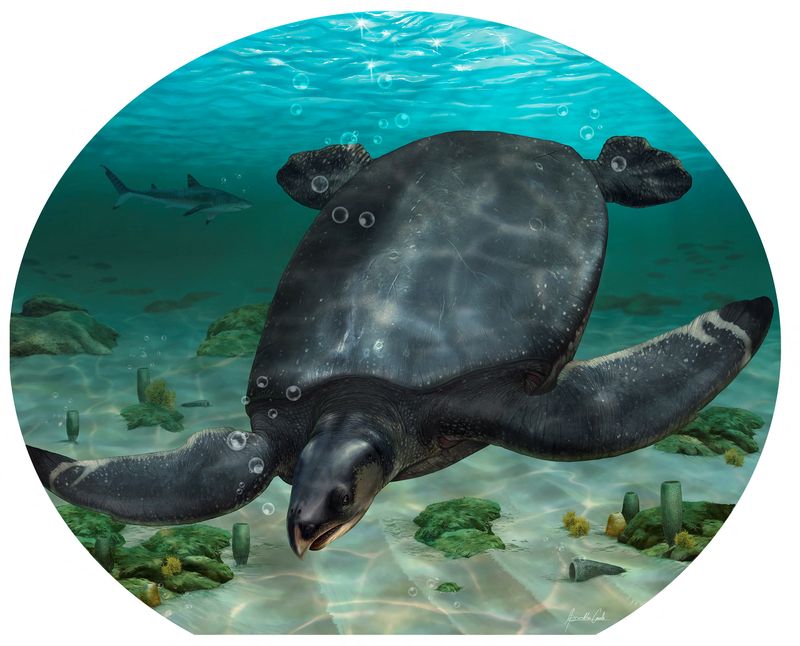 (Reuters) – Plying the subtropical seas that washed the coasts of the archipelago that made up Europe 83 million years ago was one of the largest turtles on record, a reptile the size of a small car – a Mini Cooper to be precise – that braved dangerous waters.

Researchers on Thursday described remains discovered in northeastern Spain of a turtle named Leviathanochelys aenigmatica that was about 12 feet (3.7 meters) long, weighed a bit under two tons and lived during the Cretaceous Period – the final chapter in the age of dinosaurs. It is Europe’s biggest known turtle.

It dwarfed today’s largest turtle – the leatherback, which can reach 7 feet (2 meters) long and is known for marathon marine migrations. Leviathanochelys nearly matched the largest turtle on record – Archelon, which lived roughly 70 million years ago and reached about 15 feet (4.6 meters) long.

“Leviathanochelys was as long as a Mini Cooper while Archelon was the same size as a Toyota Corolla,” said paleontologist and study co-author Albert Sellés of the Institut Català de Paleontologia (ICP), a research center affiliated with Universitat Autònoma de Barcelona.

It was good to be the hazardous size of a car, considering the traffic in the ancient Tethys Sea in which Leviathanochelys swam. Huge marine reptiles with powerful jaws called mosasaurs were the largest predators – some exceeding 50 feet (15 meters) in length. Various sharks and rays as well as long-necked fish-eating marine reptiles called plesiosaurs also lurked.

“Attacking an animal of the size of Leviathanochelys possibly only could have been done by large predators in the marine context. At that time, the large marine predators in the European zone were mainly sharks and mosasaurs,” said Oscar Castillo, a student in a master’s degree program in paleontology at Universitat Autònoma de Barcelona and lead author of the study published in the journal Scientific Reports.

“During the Cretaceous, there was a tendency in marine turtles to increase their body size. Leviathanochelys and Archelon might represent the apex of this process. The reason for this increase in body size has been hypothesized to be predatory pressures, but there might be other factors,” Castillo added.

Other large turtles from Earth’s past include Protostega and Stupendemys, both reaching about 13 feet (4 meters) long. Protostega was a Cretaceous sea turtle that lived about 85 million years ago and, like its later cousin Archelon, inhabited the large inland sea that at the time split North America in two. Stupendemys prowled the lakes and rivers of northern South America about 7-13 million years ago during the Miocene Epoch.

Scientists unearthed the Leviathanochelys remains near the village of Coll de Nargó in Catalonia’s Alt Urgell county after fossils protruding from the ground were spotted by a hiker in the Southern Pyrenees mountains. To date, they have found parts of the posterior portion of its carapace, or shell, and most of the pelvic girdle, but no skull, tail or limbs.

The fossils indicated that it possessed a smooth carapace similar to leatherback turtles, with the shell itself about 7.7 feet (2.35 meters) long and 7.2 feet (2.2 meters) wide. Leviathanochelys appears built for the open ocean, returning to land only rarely – for instance to lay eggs.

The presence of a couple of bony bulges on the front side of the pelvis differs from any other known sea turtle, indicating that Leviathanochelys represents a newly discovered lineage. It shows that gigantism in marine turtles developed independently in separate Cretaceous lineages in North America and Europe.

Leviathanochelys aenigmatica means “enigmatic leviathan turtle” owing to its large size and the curious shape of its pelvis that the researchers suspect was related to its respiratory system.

“Some pelagic (living in the open ocean) animals show a modification in their respiratory system to maximize their breathing capacity at great depths,” Sellés said.

(Reporting by Will Dunham in Washington, Editing by Rosalba O’Brien)