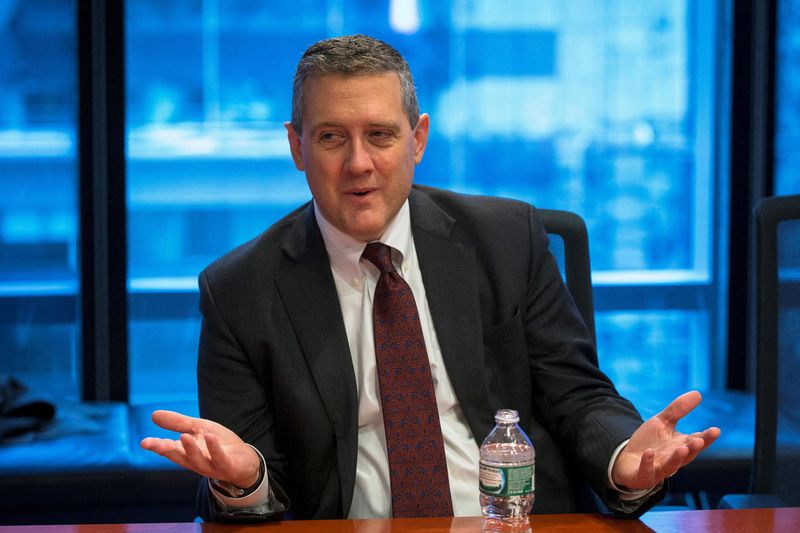 WASHINGTON (Reuters) -Even under a “generous” analysis of monetary policy, the Federal Reserve needs to keep raising interest rates given that its tightening so far “had only limited effects on observed inflation,” St. Louis Fed President James Bullard said on Thursday.

Bullard said the Fed’s target policy needs to rise to at least a range between 5.00% and 5.25% from the current level of just below 4.00% to be “sufficiently restrictive” to curb inflation, though he would defer to Fed Chair Jerome Powell regarding how much higher to move rates at upcoming policy meetings.

“On the question of how much to do at any particular meeting … I would leave that up to the Chair,” Bullard said at an economic event in Louisville, Kentucky. “If you do more now, you have less to do in the first quarter (of 2023). If you do less now, then you have more to do in the first quarter. Generally speaking, it probably does not make a lot of difference in terms of the macroeconomics.”

However, he said it was clear rates needed to continue rising, and that recent reports showing slower than expected inflation provided only “tentative” evidence that a disinflationary trend was taking hold.

Data showing that consumer inflation slowed in October “could easily go the other way in the next report,” Bullard said, noting the Fed had been “burned” for two years running now by inflation well above its 2% target.

In a graphic presented for discussion at the event in Louisville, Bullard showed that using even “dovish” assumptions, a basic monetary policy rule would require the Fed’s policy rate to rise to around 5%, while stricter assumptions would recommend it climb above 7% .

That entire range could fall if inflation falls more rapidly than expected, Bullard said, noting that “market expectations are for declining inflation in 2023.”

If that occurs, he said, a “very good dynamic” could develop that allows the United States to avoid a recession, as strong corporate, household, and local government balance sheets allow the economy to keep growing at a slow pace even as inflation falls .

Bullard called that his base case, and said 2023 could be the year that a disinflationary process takes hold with businesses resisting price increases in order to keep market share.

But he said that “caution is warranted” since investors and Fed officials “have been predicting declining inflation just around the corner for the past 18 months.”

A measure of “core” inflation watched closely by the Fed and used in Bullard’s analysis was running at 5.1% as of September, more than twice the Fed’s target, leaving US central bank officials aligned in favor of further rate hikes even as they discuss the pace and final destination of their policy tightening cycle.