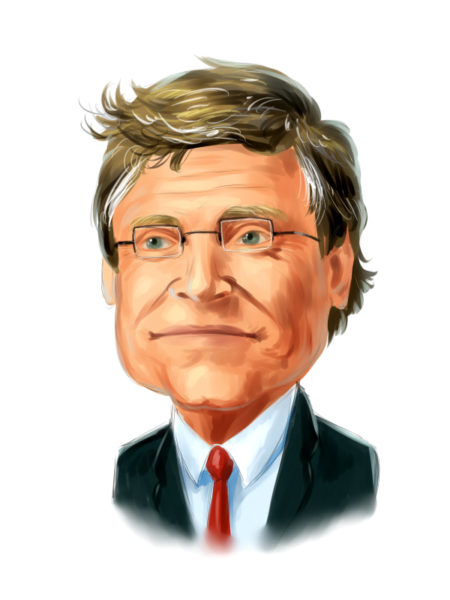 In this article, we discuss top dividend stocks to buy according to billionaire Bill Gates. You can skip our detailed analysis of Gates’ foundation and its performance over the years, and go directly to read Bill Gates’ Top 5 Dividend Stocks.

Founded in 2000, Bill & Melinda Gates Foundation Trust is one of America’s largest private charitable organizations. The fund has expanded its reach over the years by developing philanthropic institutions in low-income countries and areas around the world. Since its inception, the fund has spent over $53.8 billion in grants, donations, and other humanitarian activities. As of January 2022, the firm’s funding commitments to fight Covid-19 surpassed $2 billion. Mark Suzman is currently serving as the Chief Executive Officer of the firm.

In one of her interviews with Bloomberg in September, Melinda Gates mentioned that the onset of the pandemic has hampered the progress of various issues, especially poverty and climate change. She further emphasized her commitment to this global platform to fight social inequities prevalent in the world today. Both Bill and Melinda Gates have shown their allegiance to the fund by funding work in over 144 countries. In addition to this, the Gates Foundation provided charitable support worth over $6.7 billion in 2021, covering various areas including global development, health, and gender equality. In July, Bill Gates announced to increase in the fund’s payout by 50% over pre-pandemic levels, to approximately $9 billion by 2026, up from $6 billion in pre-Covid times, as reported by Wall Street Journal.

Bill & Melinda Gates Foundation Trust has roughly $34 billion in assets under management as of Q3 2022, compared with $17.6 billion in the preceding quarter. The fund’s investments during the quarter are within the tech, services, finance, and industrial goods sectors. Berkshire Hathaway Inc. (NYSE:BRK-B), Microsoft Corporation (NASDAQ:MSFT), and Coupang, Inc. (NYSE:CPNG) are some of the firm’s major holdings in the third quarter. In this article, we will discuss some of the best dividend stocks in Bill Gates’ portfolio.

For this list, we selected dividend stocks from Bill & Melinda Gates Foundation’s Q3 2022 13F portfolio. The stocks are ranked according to their stake value in Bill Gates’ portfolio.

FedEx Corporation (NYSE:FDX) is an American transportation company that specializes in e-commerce and related business services. During Q3 2022, The Gates Foundation purchased additional one million shares in the company, boosting its position by 188%. The fund’s total FDX stake amounted to over $227.8 million. The company represents 2.71% of Bill Gates’ portfolio.

FedEx Corporation (NYSE:FDX) currently pays a quarterly dividend of $1.15 per share for a dividend yield of 2.71%, as of November 17. The company is one of the top dividend stocks on our list as it has been raising its dividends consistently for the past 21 years.

In October, Jefferies initiated its coverage on FedEx Corporation (NYSE:FDX) with a Hold rating and a $170 price target, highlighting the company’s recent quarterly earnings.

The number of hedge funds tracked by Insider Monkey owning stakes in FedEx Corporation (NYSE:FDX) stood at 63 in Q2 2022, growing from 52 in the previous quarter. These stakes hold a consolidated value of over $1.75 billion.

Artisan Partners mentioned FedEx Corporation (NYSE:FDX) in its Q3 2022 investor letter. Here’s what the firm has to say:

“Earnings results at FedEx Corporation (NYSE:FDX), a global shipping and logistics firm, disappointed due to slowing volumes—principally in its Express segment, which resulted in negative operating leverage—in addition to continued cost pressures. The Express business has been affected by trade disruptions in Asia from China’s COVID lockdowns, as well as the mix of global consumer spending trending back toward services and away from goods—a normalization of pandemic-driven consumer behavior. A key question for investors is how much of this demand slowdown is idiosyncratic and therefore less likely to repeat and how much is the start of a possible cyclical slowdown. To counter these headwinds, FedEx is looking to achieve cost reductions while it continues to implement multi-year structural cost reduction initiatives focused on technology investments and efficiency gains. Given a mixed track record and the recent earnings miss, there is a high degree of skepticism embedded in the current stock price as it sells for less than 8X our estimate of normalized earnings. While operating results can be choppy, the longer term business economics are highly favorable given the global shipping industry’s consolidated structure and massive barriers to entry that afford operators with pricing power to counter cost inflation and earn respectable returns on capital over the business cycle.”

Waste Connections, Inc. (NYSE:WCN) is a Texas-based waste services company that specializes in the collection, transfer, disposal, and recycling services. On November 2, the company announced a 10.9% hike in its quarterly dividend to $0.255 per share. This was the company’s sixth consecutive year of dividend growth. The stock’s dividend yield on November 17 came in at 0.74%.

Waste Connections, Inc. (NYSE:WCN) is one of the latest acquisitions of The Gates Foundation. The hedge fund started building its position in the company with over 2 million shares, worth over $290.4 million. The company represents 0.85% of Bill Gates’ portfolio.

In October, Jefferies initiated its coverage of Waste Connections, Inc. (NYSE:WCN) with a Buy rating and a $165 price target. The firm called the company best-in-class amongst its waste peers with above-average pricing growth and margins due to its wide exposure.

Waste Connections, Inc. (NYSE:WCN) was a part of 33 hedge fund portfolios in Q2 2022, compared with 34 in the previous quarter, according to Insider Monkey’s database. The stakes owned by these hedge funds hold a total value of nearly $1.2 billion.

Carillon Tower Advisers mentioned Waste Connections, Inc. (NYSE:WCN) in its Q3 2022 investor letter. Here’s what the firm has to say:

“Waste Connections, Inc. (NYSE:WCN) is a solid waste company providing non-hazardous waste collection, transfer and disposal services, and recycling services in mostly exclusive and secondary markets throughout the United States and Canada. The company has operated well throughout the recent period of rising cost pressures by largely succeeding in passing through the majority of the elevated costs to customers. Investors also have appreciated the defensive characteristics inherent in the firm’s business model as we potentially approach a period of economic uncertainty.”

Coca-Cola FEMSA, SAB de CV (NYSE:KOF) is a Mexican multinational beverage company. Barclays appreciated the company’s performance despite headwinds and also highlighted its improving fundamentals. Given this, the firm raised its price target on the stock in October to $72 with an Overweight rating on the shares.

Bill & Melinda Gates Foundation has been investing in Coca-Cola FEMSA, SAB de CV (NYSE:KOF) since the third quarter of 2012, when it bought the company’s shares worth over $801.6 million. During Q3 2022, the hedge fund did not change its position in the company and its total KOF stake amounted to over $362.8 million. The company represents 1.06% of Bill Gates’ portfolio.

Coca-Cola FEMSA, SAB de CV (NYSE:KOF) currently pays a dividend of Ps 0.67875 per share, which is paid to shareholders in two installments. As of November 17, the stock has a dividend yield of 4.00%.

As of the close of Q2 2022, 9 hedge funds in Insider Monkey’s database owned stakes in Coca-Cola FEMSA, SAB de CV (NYSE:KOF), up from 6 in the previous quarter. These stakes have a total value of over $462 million.

An American multinational retail company, Walmart Inc. (NYSE:WMT) has been a part of The Gates Foundation since the third quarter of 2012. The firm started its position in the company with shares worth over $782.5 million. At the end of Q3 2022, the hedge fund owned over 3 million WMT shares, valued at over $391.8 million. The company made up 1.15% of Bill Gates’ portfolio.

Walmart Inc. (NYSE:WMT) is one of the top dividend stocks on our list as it has been raising its dividends consistently for the past 49 years. The company pays a quarterly dividend of $0.56 per share for a dividend yield of 1.51%, as recorded on November 17.

Morgan Stanley provided a positive outlook on Walmart Inc. (NYSE:WMT) due to the company’s recent quarterly earnings and growth across all segments. In November, the firm lifted its price target on the stock to $164 with an Overweight rating on the shares.

The number of hedge funds owning stakes in Walmart Inc. (NYSE:WMT) stood at 67 in Q2 2022, growing from 60 in the previous quarter, as per Insider Monkey’s data. These stakes are collectively worth over $3.78 billion.

Leaven Partners mentioned Walmart Inc. (NYSE:WMT) in its Q3 2022 investor letter. Here’s what the firm has to say:

“In our last quarterly letter, I briefly mentioned that the consensus estimates for corporate profits appeared to be a bit too sanguine. I referenced a Reuters article that reported, as of June 17, Wall Street expected S&P 500 earnings to grow by 9.6% in 2022, which was up from 8.8% in April and from 8.4% in January. That tune began to change at the end of July and accelerated in August and September, as major players, such as walmart (NYSE:WMT), has recently issued profit warnings and/or have withdrawn guidance. In response, Wall Street has altered its outlook: lowering third-quarter profit growth to 4.6%[2] from 7.2% in early August and slashing full-year profit growth to 4.5%.”

Ecolab Inc. (NYSE:ECL) is a Minnesota-based chemicals company that specializes in the purification and cleaning of water in a wide variety of applications. In November, BMO Capital maintained a Market Perform rating on the stock, expecting the company to show strong performance in the upcoming quarters.

During Q3 2022, The Gates Foundation increased its position in Ecolab Inc. (NYSE:ECL) by 12%. The fund currently owns over 4.8 million shares in the company, worth $702.8 million. The company accounted for 2.06% of Bill Gates’ portfolio and is one of his most important holdings alongside Berkshire Hathaway Inc. (NYSE:BRK-B), Microsoft Corporation (NASDAQ:MSFT), and Coupang, Inc. (NYSE:CPNG).

Ecolab Inc. (NYSE:ECL) holds one of the strongest dividend policies. The company has been paying dividends on its common stock for the past 85 years and has raised its payouts for 30 years in a row. It currently offers a quarterly dividend of $0.51 per share and has a dividend yield of 1.38%, as of November 17.

As of the close of Q2 2022, 43 hedge funds in Insider Monkey’s database owned stakes in Ecolab Inc. (NYSE:ECL), down from 47 in the previous quarter. The collective value of these stakes is over $1.7 billion.

ClearBridge Investments mentioned Ecolab Inc. (NYSE:ECL) in its Q3 2022 investor letter. Here’s what the firm has to say:

“We have focused our valuation discipline to reduce exposure to higher-multiple stocks most at risk of multiple compression in the current environment. Along these lines, while we remain constructive on the high returns on invested capital Ecolab Inc. (NYSE:ECL) earns in its core business, over the years its diversification has diluted this segment’s importance, and we feel less comfortable defending the position at current valuations.”