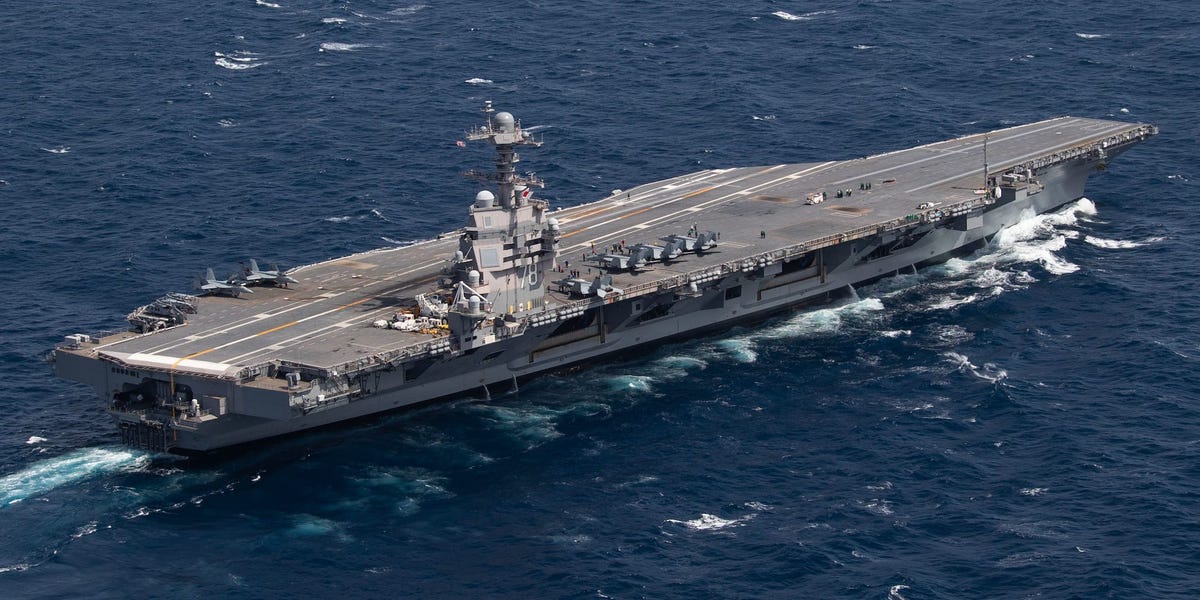 Five NATO aircraft carrier strike groups are patrolling the waters around Europe, highlighting naval cooperation and the capacity for significant naval operations within the military alliance, the US Navy said.

Participating flattops include the US Navy’s USS George HW Bush and Gerald R. Ford, the service’s newest supercarrier, the British Royal Navy’s HMS Queen Elizabeth, France’s Charles De Gaulle, and Italy’s ITS Cavour. The strike groups, which include not just carriers but their escorts as well, are carrying out routine patrol missions in the Atlantic Ocean, North Sea, and Mediterranean Sea.

The Ford, the first of a new class of aircraft carrier, set sail on its maiden deployment in October equipped with a suite of new technologies intended to make it more capable than its Nimitz-class predecessors.

When the ship deployed, Rear Adm. Gregory Huffman, commander of the Gerald R. Ford Carrier Strike Group, said that the “deployment is an opportunity to push the ball further down the field and demonstrate the advantage that Ford and Carrier Air Wing (CVW) 8 bring to the future of naval aviation, to the region and to our allies and partners.”

The Navy said in a Thursday statement on the carrier operations that each country has its own mission objectives and that it is not uncommon for multiple carrier strike groups to be deployed at the same time since NATO countries maintain a continued presence in waters around Europe.

She added that the patrolling “is also an opportunity to test allied cooperation and to practice NATO’s ‘deter and defend’ concept across all geographic areas, operational domains and functional areas of the Alliance.”

The deter and defend concept referenced by Singh is a nod to NATO’s “staunch commitment to collective defence” through integrating and planning military activities to counter any threat, according to the alliance.

“NATO routinely demonstrates its cohesion, coordinating with multiple international maritime assets at once,” commander of the NATO Allied Maritime Command Vice Admiral Keith Blount said in the Navy’s statement. “This opportunity demonstrates our ironclad commitment to the stability and security of the Euro-Atlantic Area and the strength of our collective capability.”

“Five carriers within our operating area presents a further opportunity to consolidate our approach to air defense, cross-domain cooperation and maritime-land integration,” he continued.

While these operations are regularly scheduled activities and not necessarily a response to Russia’s unprovoked war against Ukraine, they come at a time where increased Russian aggression has threatened European and NATO security.

Earlier this week, a deadly explosion was reported in eastern Poland, just over the border with Ukraine, in what marked the first time that the conflict spilled into the territory of a NATO country. The incident triggered an alarmed response from some members of the military alliance and also from top Ukrainian officials who blamed the blast on Russia despite indications it may have been unintentionally caused by a Ukrainian surface-to-air missile amid a Russian barrage of Ukraine’s cities.

NATO has not blamed Ukraine though, with alliance leadership stressing that “Russia bears ultimate responsibility as it continues its illegal war against Ukraine.”